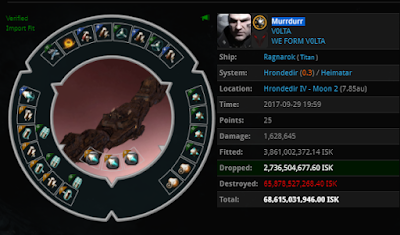 Doing everything right...except one mistake.

Moving a titan through different parts of low sec can be a pretty scary ordeal.  Murrdurr knows how to move his ships and have avoided fake "freeport" citadels across New Eden.

With over 300 killmarks on his titan, a survivor of B-R, and most of the time involved in solo or small gang situations, he is well adept to getting out and surviving.

How he got caught

After he self destructed his cyno and got his titan in to a safe location, Murrdurr was happy, he was one step closer on his journey without anyone catching him.  Then he remembered he had extra cyno ships in his titan.  Maybe instead of going after a rookie ship and finding a cyno module elsewhere, he could just conveniently get the cyno ship from his cargo hold?  Yes, that will work...

"So it was a combination of bad luck, bad decisions and good hunting. I jumped to an SD cyno, fleet warped myself to a safe and cloaked the titan. NP.  GG.  new glass off wine.  Warped my cyno pod to the titan (bad decision) to get a new ship.  Just after I entered warp +1 local. I jetisoned a cyno ship and warped to another safe as I was decloaked by my own toon."

Wait, you died to your own decloak?

"Bounced twice and thought I was clear of probes so cloaked while I was getting my out cyno in position.  Pretty much, otherwise I'd have been safe..."

So there you go boys, in EVE, some folks are just baller combat probers. Despite your hyperspatial rigs, despite inertia stabs - someone can still actually work CCP's new EVE probing UI with no problem.

He wanted to give some kudos to the hunters that killed him:

"Well done to the guys on being super on the ball" 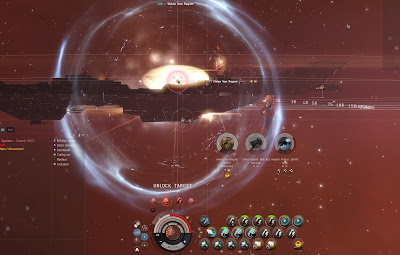 Special thanks to Murrdurr for providing this point of view and last screenshot of his rag.