We are the guys that build your ships like procurers and stealth bombers in trade hubs. Some of the guys delivering your goods in low and null sec for hauling corps are delivered by SLYCE alts.

We also operate the only freeport in Wicked Creek, welcoming everyone as long as they don't touch the structures. However, strangely enough, Goons, CFC / Imperium's Reavers attacked and entosis'd the freeport. There were reservations and apologies sent in private but it was done apparently because Asher Elias, the Reavers FC, simply couldn't find an open timer.

So the stage was set...Asher was set on ensuring that the freeport became....a freeport (???).

The day prior, I saw Goons immediately head shot two TEST fleet commanders. It ended a battle very quickly in F-QQ5N, and it would have shaped up to be a decent fight especially since we just started joining (we came from another op). However, once the FCs died, TEST called for an extract and we followed suit. According to what I heard on comms, Asher was apparently under orders to be jerks and to make it 'no fun'.

Because of this, I knew the favor had to be returned in principle.

By knowing their staging areas and approximate time when they would be coming, we started dropping Mobile Depots and Medium to Large warp bubbles on every corner, of every gate, of every angle from their Curse station to their destination. Secondly, we created a bombing solution that would have ensured a glorious death if they took the primary route (highlighted as 'red' below). 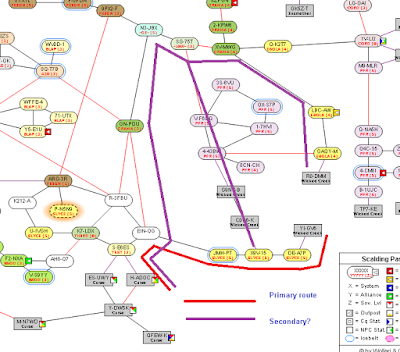 Goon scouts came in and reported back "I see dozens in local but nothing on d-scan and more bubbles". Asher, being one of the Goons' most experienced FCs immediately recognized what that was: death by stealth bombers.

Recognizing the risk, he thought of bypassing the SLYCE pipe by utilizing the route northwards. "The rest of this space isn't their territory, surely, the bubbles wouldn't be in these areas..." But alas, no. There were more bubbles. On every gate, at every angle.

More bubbles than a Russian bott...ratter. 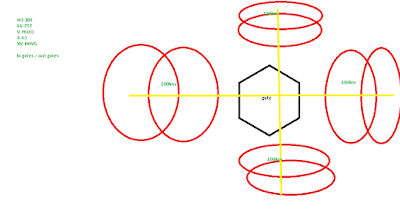 On top of every gate, on every bubble, messages of hope were anchored in space. 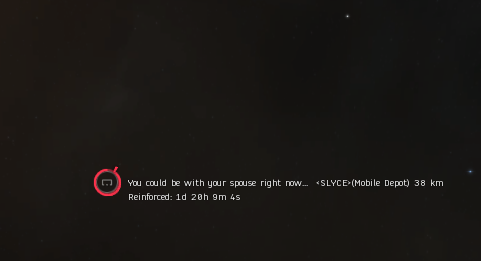 "You could be with your spouse right now..."

"Video games are supposed to be fun..."

These 'messages of hope' created an environment of love and care that hopefully removed at least some of the pain of having to manually burn to the gate.

We did take our time creating these phrases. It took the team at least 30 minutes to formulate these touching words of expression.

The End of the March

Once the Imperium forces were able to burn through the bubbles, the timer was finally done, and the nodes decloaked, the 148-man fleet (dscan) started going system by system in the R-M719 constellation. Goons and friends finally settled in Q-GHN.

One of the very first casualties was a SLYCE scout, Marrus Day, and his battle procurer.  It is a tradition, that every battle must begin with a procurer and his beacon of hope (cyno).

Today's story isn't necessarily about the outcome.  The true narrative is what happened behind the scenes, the various pilots that manufactured the warp bubbles, launched them, and created the most unfun march of any battle since the invention of tidi.

And thank you, for the priceless reddit reactions we got for The Great Bubble March of Scalding Pass...

"This [TEST intel] is totally inaccurate. Like I said in the other thread the only FCs I know for Test are Naliao Vee and Trafalgar. If they aren't FCing I lacked the capability to headshot them. If you listen to my podcast you'll know I like to do things to increase the challenge level for me (for instance: for several months I didn't use probes in fleet fights to prepare for the proposed fleet warp changes). Well this deployment I decided not to use any human intel, so I didn't have any inside information so the only way I could determine FCs was if they were in a special ship or if they were clearly the anchor. On top of that I didn't call for any headshots unless the opposing FC attempted one on me first. I don't see how people can get upset by that policy.

Lastly "I had orders to make it no fun" couldn't be more wrong. This was my deployment, I choose guys so we'd come down and have slightly less to even numbers to Test. The Lawn FC wanted to drop caps in Test's staging system which I thought was a guaranteed death but he thought it'd be fun so I said "go for it". Other GSF FCs were asking me every day if they could come down and third party on these fights "I can bring a tengu fleet" and most of the time I straight up told them no, but when I did relent I told them they could only bring a tackle fleet and nothing else. So given all that I really have no idea why Test would claim I was "ordered" to make it unfun when I tried my damndest to make sure everyone was on roughly even terms. "