It seems like all miner PVP stories start out with an angry person and a mobile tractor unit (MTU).

In this case, Ciphas Patrouette, Bel Dian, RiotRick, and Kopaka Newton were just goofing off after C3/C4 wormhole adventures. Afterwards, Ciphas and Bel started ice mining and reported an MTU that was left alone on an ice belt. Riot comes in to shoot it and all of a sudden, a neutral Orca and Skiff (not the owners of the MTU) started throwing drones around Riot. This would have been an okay choice if Riot was in a frig or a cruiser, but when he's coming off soloing C3 sites, more than likely you'll need some more guns.

The skiff was able to escape due to warp core stabilizers, but came back in a battleship Machariel. Unfortunately, the Mach wasn't able to properly position himself and was too close to the fast moving Legion. He barely hits Riot.

The hero Orca, the saviour of a stranger's MTU (which was saved btw), falls to the Legion, with a skiff and a hulk in its ship bay. (*golf clap*) That's a true sacrifice, a true miner bro right here. 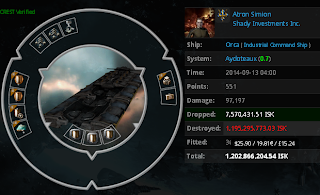 Posted by Publisher at 2:41 PM