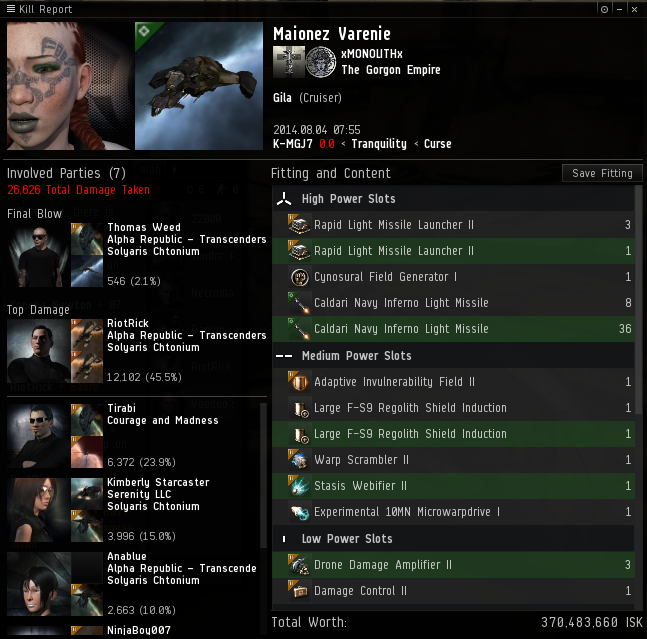 Anablue didn't intend this to be a capital escalation.

He was just a happy little miner wanting to get some ore until Majonez Varenie of the Gorgon Empire started attacking him in an expensive 370m Gila. His 30m procurer withstood for a while and backup started arriving.

Surprise!
What Majonez didn't realize, was that Alpha procurers have warp disruptors, so she couldn't warp out. What happened next was a surprise to all of us -- Majonez lit a cyno and brought in two expensive carriers, an Archon (pilot: Blackfishik) and Nidhoggur (pilot: makstomaks). Clearly, Gorgon Empire's escalation skills are elite!

Right when the Gila died, the Archon and Nidhoggur started locking ships on the field and pointed/neuted what they could.  Tirabi lost his Ishtar after helping drop Majonez and RiotRick was locked up, neuted, webbed, and warp disrupted by the two carriers. About 20 Einherji started hitting on Rick, but surprise -- the tank is buffed like a madman. Taxing his afterburners, and knowing that the carriers are too slow moving -- Rick and the rest got out.

Everyone and their mother started bringing out ships into the system, but Gorgon cyno'd out. Conclusion? Survived a hot drop, won the ISK war, and got important intel on capital pilots/ship types.

Posted by Publisher at 3:15 AM